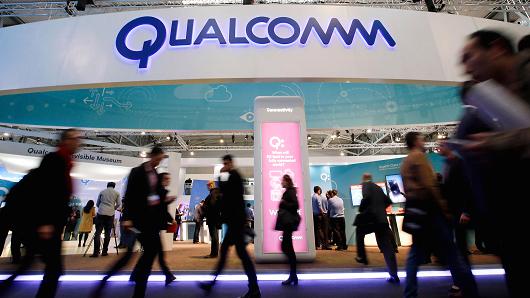 Qualcomm Inc., the largest maker of mobile-phone chips, will acquire NXP Semiconductors NV for $47 billion in an all-cash deal, aiming to speed an expansion into new industries and reduce its dependence on the smartphone market.

San Diego-based Qualcomm agreed to pay $110 a share for NXP, the biggest supplier of chips used in the automotive industry, or 11 percent more than Wednesday’s close, the companies said in a statement Thursday. The deal will be funded with cash on hand as well as new debt.

Chief Executive Officer Steve Mollenkopf is betting the deal, Qualcomm’s largest ever, will accelerate his company’s entry into new businesses, starting with the burgeoning market for electronics in cars. Eindhoven, Netherlands-based NXP is strong in that market following its acquisition last year of Freescale Semiconductor Ltd. The purchase, the largest in the chip industry’s history, is Qualcomm’s response to slowing growth in demand for smartphones, which provide the bulk of the company’s revenue.

“There just isn’t enough mobile growth to be had –- they are already the dominant chip supplier and licenser of intellectual property in an industry where the product is being commoditized and volume growth is moderating,” said Sid Parakh, a fund manager at Becker Capital Management, which owns Qualcomm stock. “As a long-term investor, I would much rather have a more diverse company that has the potential to participate in new markets and probably grow significantly more than it would in a mobile-only world.”